Bert Richardson Seeks Reelection to the Court of Criminal Appeals 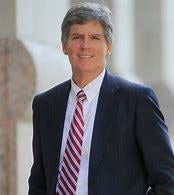 Alamo City native Robert Carl “Bert” Richardson grew up in an Air Force family, went to undergraduate school at Brigham Young University and took a law degree at St Mary's University School of Law in San Antonio. He had been a Bexar County Assistant District Attorney and was an Assistant U. S. Attorney for the Western District of Texas. Governor George W. Bush appointed him to the 379th District Court of Bexar County in 1999. The blue wave that hit in 2008 washed him out of office, and he was a well-traveled senior visiting judge In Del Rio and El Paso and Austin. When then-Governor Rick Perry was being criminally prosecuted the hot potato of that trial was handed to him. He found Sonia Cacy actually innocent

Richardson comes across as a thoughtful man, with the energy and enthusiasm of someone much younger than 63. A bicyclist, long-distance runner, and photographer, Judge Bert Richardson is fourth in seniority on the nine-member Texas Court of Criminal Appeals. He seeks reelection after his first term. He is board-certified in Criminal Law, fluent in Spanish, and a long-time adjunct professor of law at St. Mary's.

Waco attorney Gina Parker is challenging him for the Republican nomination and the winner of that race will face the winner between Democrats Houston lawyer William Pieratt Demond, Dallas Judge Elizabeth Davis Frizell, and Terrell attorney Dan Wood,