In Texas, Sometimes the Cops Can Hunt You Down with Your Cell Phone without a Warrant. 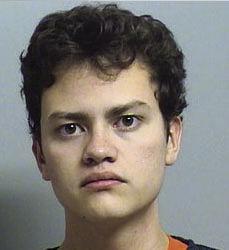 Christian Vernon Sims, pictured above courtesy of The Paris News, was a suspect in his grandmother's murder. The grandmother's credit card had been used 80 miles north of the crime scene. A sheriff's deputy who was the investigating officer in the shooting returned to his office to seek a warrant for the cell phone information. It was a Thursday; it was before the close of business hours. A sheriff's deputy requested that Sims's phone be pinged without a warrant on an emergency basis. That deputy reported that 20 minutes passed before he got real-time information as to where Sims's phone was. The sheriff's office figured out what road Sims was taking, and local police forces along that road narrowed down where he was to a motel where he was arrested without incident. He moved to have the phone information suppressed, which the trial court denied, and he ended up pleading to a 35-year sentence, but with the right to carry the motion to suppress upon appeal. The Sixth Court of Appeals in Texarkana affirmed, and the Court of Criminal Appeals granted a petition for discretionary review.

The federal Stored Communications Act provides that its civil remedies are the only sanctions for a nonconstitutional violation of it. Neither the COA opinion nor the CCA opinion note that under Article Six, paragraph two of the United States Constitution, federal law trumps any state law at all– even a state's constitution. So suppression on the basis of the Stored Communications Act was always a nonstarter.

The Court of Criminal Appeals ruled that Article 18.21 was made law after Article 38.23 and, so, supersedes it. Article 18.21 has been moved to chapter 18B of the Code of Criminal Procedure. This case was, of course, under the old law.
Though the United States Supreme Court case of Carpenter v. United States found that Carpenter's Fourth Amendment rights had been violated by the United States by its looking at 12,898 location points cataloging Carpenter's movements over 127 days—an average of 101 data points per day without a warrant based on probable cause. It said its ruling had nothing to do real-time information as in Sims's case and opines that exigent circumstances might arise in the case of a fleeing suspect as here. The CCA held, therefore, that Sims's case was not on all fours with Carpenter.

This case was wrongly decided. There was not any exigency excusing the lack of a warrant. The suspect was already at least 80 miles away. He was 16 years old and had killed his grandmother– no reason to think that he was a great danger to others. He was driving in a car and was going to have to sleep. The record is clear that law enforcement could have a gotten a warrant. The court just did not want to rule in favor of a granny-killer.

To be fair to my friends in law enforcement, any prudent Texas agency is going to implement procedures to get a warrant in situations like this. It is a best practice and keeps the appellate prosecutors from having to go one or more extra rounds in a future case.